Clinical and Hygienic Aspects of Exposure to Electromagnetic Fields: A Review of the Soviet and Eastern European Literature

Christopher Dodge, affiliated with the Library of Congress, wrote the first comprehensive review of the world (especially the Soviet and Eastern European) literature on the biological effects of microwaves in 1964. The current document was written 5 years later during which time the author was with the Biosciences Division, U.S. Naval Observatory, in Washington, D.C. This document concentrates on human clinical studies and occupational hygiene surveys of microwave exposure and is well worth reading.

What is clear is that by the late 1960 the Soviet and Eastern European scientists had conducted numerous studies on the effects of microwave radiation on humans, that biological and health effects were documented for a range of frequencies at non-thermal levels, and that this information was available to the U.S. military. Why this science was not taken more seriously, why guidelines were not influenced by this research, and why we are still debating thermal vs non-thermal effects is a mystery that I leave for historians and philosophers to debate.

Here are a few gems from this document: 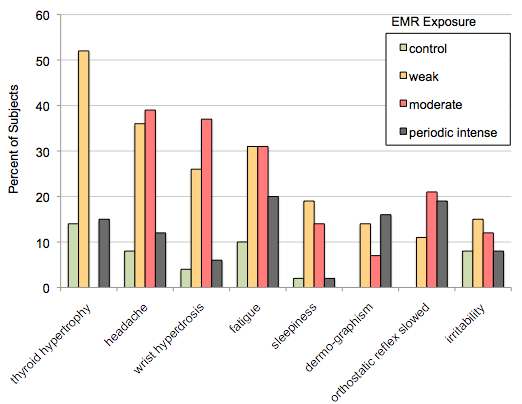